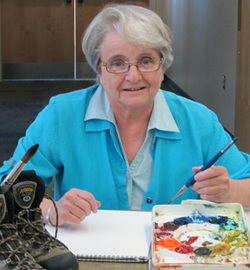 Betty was raised on a farm in Indiana.  She received an undergraduate degree in art from Indiana University in 1966. She taught art in public schools, including the Navajo Reservation in Arizona. She enrolled in an MFA program at the University of Arizona in 1969/70, but decided a career in academic art programs was improbable for a woman at that time and stopped the program.  She became involved in environmental issues.  She co-organized the Chicago Group of the Sierra Club in the mid-to-late 1970s.  She received an MS in Library Science in 1988 from the University of Illinois. She worked as a library professional at Columbia University and SUNY Health Science Center in Brooklyn, NY and later, developed a library for a large research institute in Manhattan. She became involved with the anti-racism program in the Brooklyn Unitarian Church. She served in various officer positions in the NYC ASIS (American Society for Information
Scientists).

She re-involved herself in the arts by joining a group of artists in Brooklyn who hired a model for a once-a-week drawing session. She enrolled in watercolor classes at the Brooklyn Botanical Gardens.  She retired and returned to Indiana.  She joined the Bloomington Watercolor Society and became involved in an Indiana backpacking group. Using that group as a base, she started developing hike and art programs.  Current interests are watercolor painting and hiking and art programs.  She is serving on the board of the Bloomington Watercolor Society. 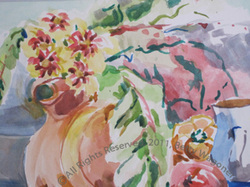